Today I want to talk to you about the indirect costs associated with your workers’ compensation program that you probably don’t know. See, everybody focuses on their premium, and in Florida, that’s easy to do because we all know that the State sets our rates. We all know that if we go to 10 different insurance companies, or even if you go to 10 different agents that go to 10 different insurance companies, the rates are going to be the same.  The State of Florida tells us what we have to charge per $100 of payroll by class code; it’s legislated. But what agents don’t talk about typically is your experience modification factor and how it is affected by the way claims are handled. Now, we have spoken of the experience mod in plenty of other videos and blog posts. Still, there’s a more significant underlying factor to your overall total cost of risk and workers’ compensation premiums than what you realize.

The Statistics on Indirect Costs

See, what people don’t talk about, what agents don’t talk about is the indirect costs associated with a workers’ compensation claim. The reason why is they probably don’t understand them. There have been many times that I have talked with business owners and decision-makers where they don’t realize how much money is leaking from their financial statements due to indirect costs as well. The Bureau of Labor Statistics says that the indirect costs of any workers’ compensation claim across the general industry ranges from two to 20 times the direct cost of the claim. Now I realize that you probably don’t believe this. Many times when I talk with prospects, they don’t think it either, but I need you to understand that these are proven statistics and whether you want to believe it or not it’s happening in your organization right now.

Let’s say, for example, that you had $100,000 worth of workers’ compensation claims last year. Yes, you might’ve had an impact on your mod going forward, and you may pay some more premium. But what you don’t realize is, using the Bureau of Labor Statistics numbers, at a bare minimum, you spent an additional $200,000 from your company’s financial statements in indirect costs. The argument becomes, “There’s no way that I’ve spent that much money in indirect costs,” and I need you to understand that it’s an invalid argument. See, it’s tough for me to accept that a company could have an experience mod of 1.4, which by all accounts is an F or even an F minus on the grading scale, but for some reason, they’ve been able to become best in class at soft cost containment. See the best in class companies, the ones with full-time risk managers and risk management staff, are the companies that are getting two times.

What Are Examples of Indirect Costs?

If your mod’s high and you don’t have a sophisticated risk management department, or benchmarks, or processes and procedures, guess what? You’re probably paying more. So, as you think through this, you have to ask yourself, “What are the things that contribute to the indirect costs that David’s talking about today?” Well, we could be talking about the cost to rehire, replace, and retrain. You have to spend money to do that if you have an injured worker that’s out. You could have the cost of lost productivity. If you bring the new people in, it takes them a while to get to the same level as the person who has gotten injured. You could have overtime charges because you didn’t go out and rehire and retrain, but you used your existing help to work more hours.

You could have a loss of productivity or production instead if you’re a manufacturing concern. God forbid a team member loses a limb in a piece of automated equipment, and you have to shut that workstation down for several hours at a bare minimum, maybe even 24 or 48 hours. What happens if you have a deductible and that injury caused that piece of equipment to get broken? Where do you get that money? What about the loss of market share?

What if you’re a manufacturer who has just in time production, and you have an injury on the line somewhere. A piece of equipment is rendered useless for a period that removes your ability to be able to get your product produced and out to your ultimate retail channel on time. What happens when you lose that shelf space? You’re going to lose money for not having shelf space now, but how do you predict how much that cost going into the future?  What if your shelf space gets reduced because your retail channel no longer can trust that you’re going to be able to get things to them in a reasonable amount of time?

See, we can go into all kinds of things like contingent business income and everything else. That’s not what we’re talking about today. What I want you to see and what I want you to understand, what I want you to get from this is, take your worker’s compensation loss runs, and then look at every claim that you had over the last year, add them up and then multiply that by two. See, I know that the average person watching this video is not the best in class operator with indirect costs, so I can win the argument of two every time. You’re probably paying more than two times, but just use two to give yourself an idea of how much it costs you.

When you do that, please do me a favor, take the time to pick up the phone and give me a shout. I’m not a high-pressure salesperson, but I am very good at educating my clients and prospects on the total cost of risk, and I make sure that they understand just how much these things are affecting their bottom line. So if you’d like for us to come in and do a complimentary experience modification audit for you, we’re willing to do that. Part of that discussion is talking about the indirect costs associated with the claims that you have in your organization. 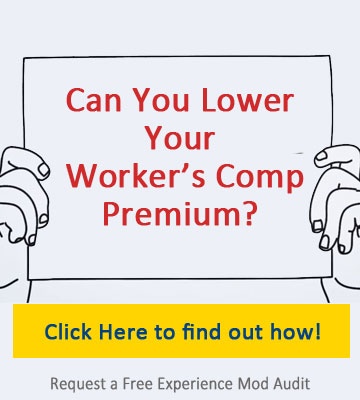 Are you ready to save time, aggravation, and money? The team at Florida Risk Partners is here and ready to make the process as painless as possible. We look forward to meeting you!